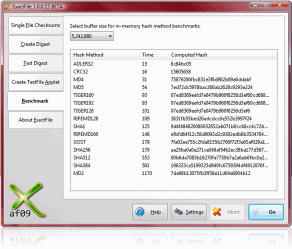 The Benchmark function will give you an idea of the computational speed of the checksum routines (hash methods) supported by ExactFile.

Select the in-memory buffer size for the data to be hashed.  The larger the size, the more accurate the benchmark.

Notes about this function: